HTML stands for Hyper Text Markup Language. In this lesson we’re going to learn some of the basic rules about how HTML works, and how to write it properly.

Essentially, HTML is there to describe the structure of the page, so they can be properly rendered by web browsers. The HTML itself is not displayed — the HTML is there to tell the browser how to behave and show the content within the HTML.

An HTML page is made up of elements. Generally, elements follow this pattern:

So elements are used to make up an HTML page, and tags are used to label what the content is, and how it should be rendered. (Paragraphs, headers, images, and so on.)

Most tags are closed, but there are some that don’t require a closing tag, such as images and horizontal lines.

Here’s a screen shot of the boilerplate html page we downloaded for the first page lesson. The stuff in grey are comments, and they describe what all of these basic tags do. 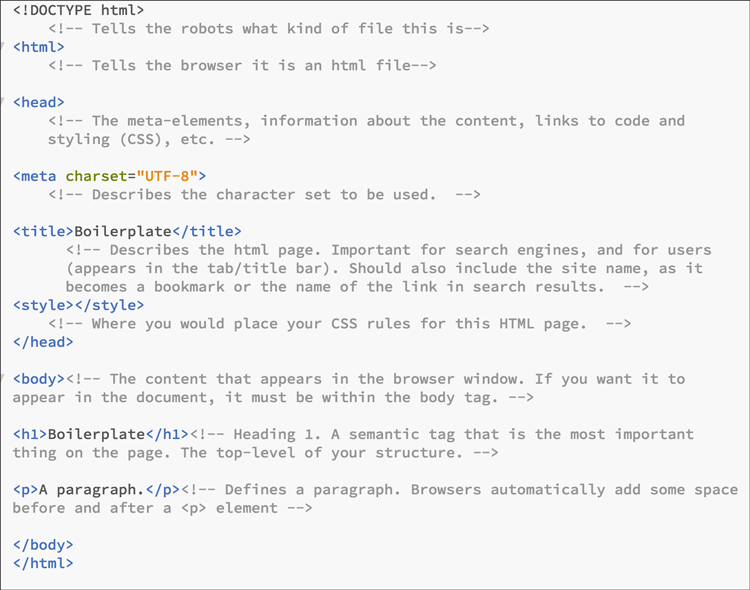 HTML tags can also have attributes, which convey extra information about the tag. They are written in the opening tag, and have name/value pairs, such as: name=”value”.

Images come with a “source” attribute, which tells the browser where to find the image asset. It looks like this:

Another important attribute for images is the “alt” attribute, which stands for alternate text. This is the text that would display if the image isn’t loading properly, or if your audience member is using a text reader to “hear” the content. (This helps with accessibility.)

Links, the <a> tag, come with an “href” attribute that tells the browser where the destination of the link leads. For example, a link to the Western U homepage:

(Except for a link <a> which can go around anything.)