Twitter is ephemeral. Tweets are short, throwaway observations, which capture the present moment, flow past quickly and are succeeded by more recent and relevant ones. We’ve looked at a way to favourite tweets, and to bookmark the URLs they may contain, but once you’ve done this, why would you want to keep a tweet? Why would you want to tweet in advance?

You can scroll through your last few thousand tweets or so (which might cover quite a span of time, depending on how prolific you are) but searching and looking at hashtags won’t take you back very far, only a few days. And yet… although finding past tweets might be difficult, they can come back to haunt you. If you want to find a tweet, it might be quite tricky, and yet if you want a tweet to disappear, someone may be able to dig it up!

Let’s look first at deleting. You can delete your own tweets, by clicking on the pulldown arrow on the top right of your tweet. If you make a mistake in a tweet, it might be less confusing to send another tweet with a correction rather than delete one that people may already have seen. If you tweet something you shouldn’t… well, don’t! However, you can’t delete someone else’s tweets, so if they’ve already retweeted you, taken a screenshot or archived the tweet using some of the options below, it might be too late!

But what if you want to keep tweets, either your own or someone else’s? Why might you want to do this?

You can save a link to individual tweets. Each tweet has its own URL. To find this, you click on the little arrow pointing upwards from a box in the bottom right of the tweet. This will let you copy the link, send the tweet in a DM or add to bookmarks. 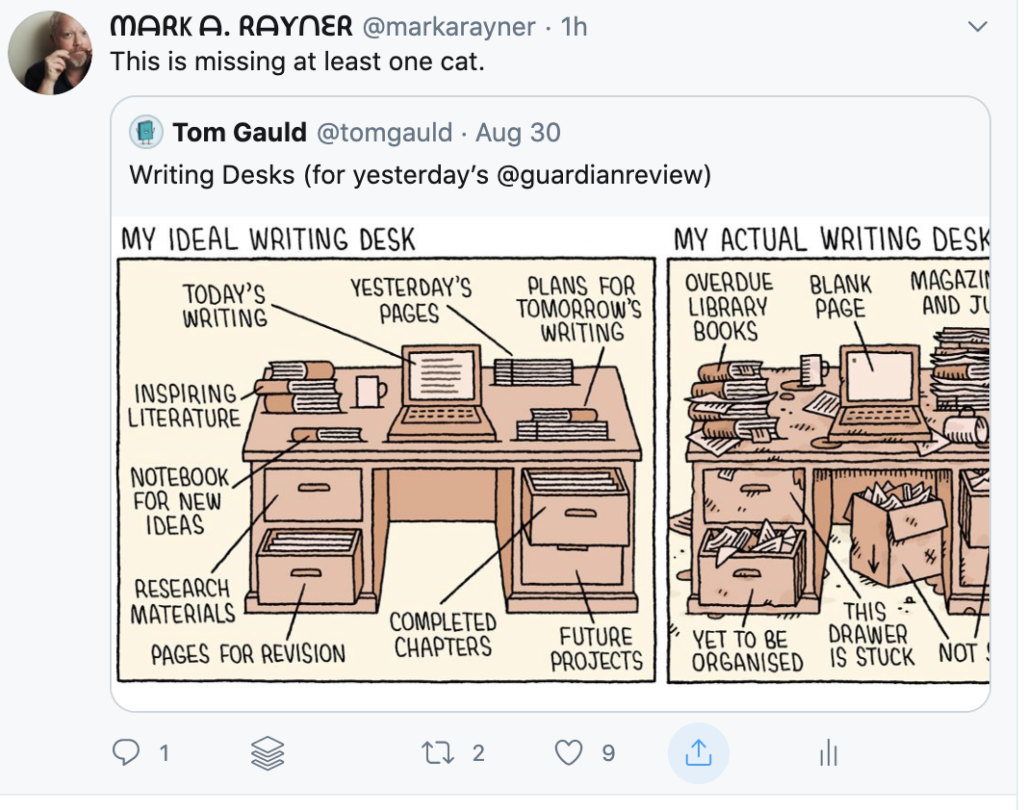 This form might not be  the best or most convenient way to present tweets for others though.

If you want a copy of all your tweets, then Twitter can send you an archive of everything you’ve tweeted. Click on the three dots icon, and select ‘Settings’. In your ‘Account’ page, scroll down to the bottom where you will see an option “Your Twitter archive: Request your archive”.

And what about future tweets?You can schedule tweets to send themselves automatically later on. Although Twitter is a medium which captures the moment, there are several reasons why you might want to do this.

You can schedule tweets from Tweetdeck, Buffer and Hootsuite. To schedule a tweet in Tweetdeck, write a tweet as normal, and then click on the clock icon at the bottom of the window you’re composing a tweet in. This brings up a small calendar, where you can choose the time and date when you want your tweet to be sent. 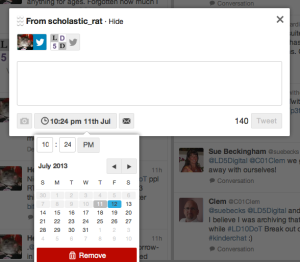 If you don’t use Tweetdeck or Hootsuite, there are other apps which only schedule tweets. You might try, for example, Buffer (which, like Sprout Social, works for other social media too). You can sign in with Twitter (or Facebook, or LinkedIn), and it will ask you for permission to access your Twitter feed. Once signed in, it will ask you what you want to share. Type in a tweet, and click ‘schedule’ or ‘buffer’. You will want to go to the ‘Schedule’ tab and set the timezone, and the day and time you want to tweet!

There’s quite a bit there to play with! Well, that’s the last of our Ten Days of Twitter, but don’t worry if you’re still catching up – so are others, and the conversation will be continuing on #MMJC10DoT for the rest of the term. I hope you’ve found the programme useful, and thanks for joining in! Keep tweeting!