Twitter has a feature which allows you to make lists of people – and you need not follow all of them to add them to a list. These lists can be private, so only you can see them, or they might be public so you can share them with others. I created such a list for the participants of this course so you can find one another. You might create such a list for the benefit of others, for example, to bring together the attendees at a workshop or conference, students on a particular programme or module, or the top accounts on a particular topic which you recommend other people should follow. You can share a list by giving people the URL of the list page, or let them view the lists you’ve created on your profile, where they can subscribe to your lists too.

You will now be invited to search for people to add to your list. You can also add them later, by clicking on their @name and going to their profile. Next to the ‘Follow(ing)’ button, you will see the notifications button and then three dots. If you click on this, you will see a menu containing the option ‘add or remove from lists’ (this is also where you can send them private Direct Messages, as in Day 4). While we’re on the topic of managing people, you can also block or report people using this menu, for example, if you are followed by a spam account or someone you don’t want following you. 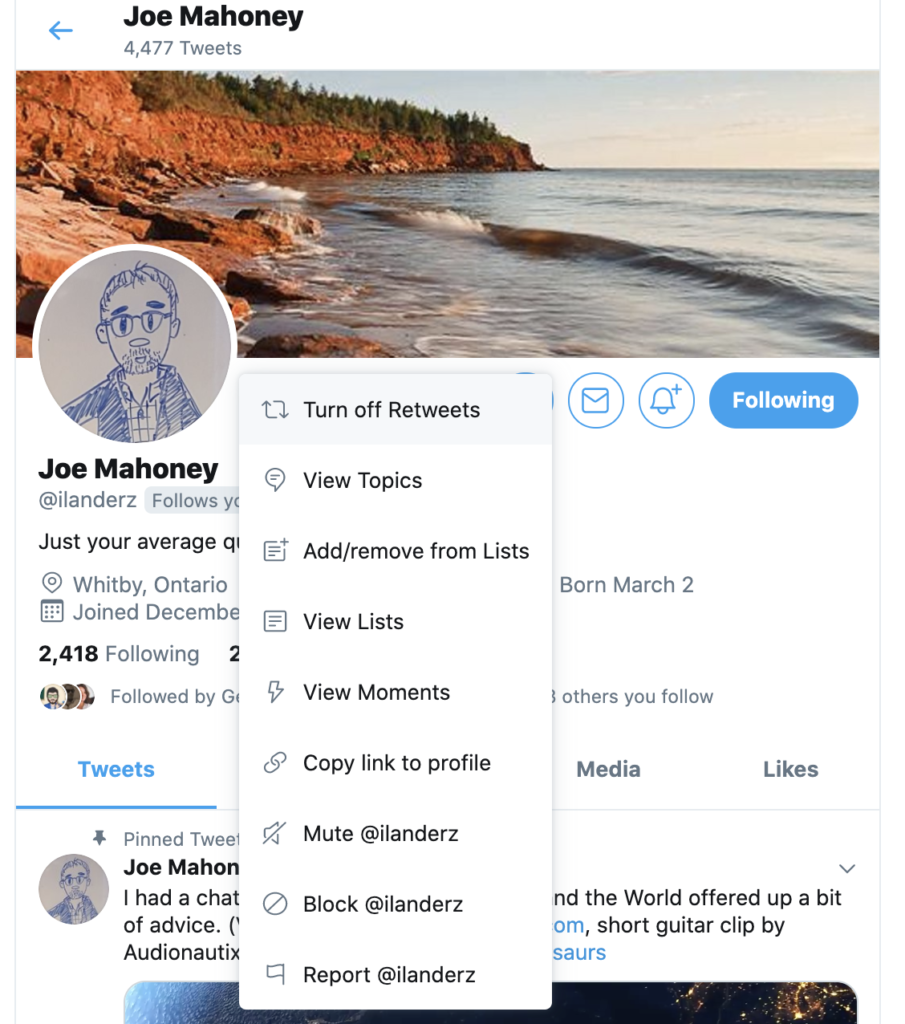 To view your lists, or those of other people, you can simply go to ‘lists’ in the menu.

If you’re keen to explore further, you might look at the following tips, or you might return to them later on, when you’ve been using Twitter for a while:

The beauty of Twitter is in its simplicity as a platform. However, sometimes you need a bit more functionality. There are some third party applications created by other companies as add-ons to Twitter, to help you out with some of the things about Twitter which you may find a bit overwhelming. Some of them will need to be integrated with your Twitter account to drawn information from them, and to do this, you will need to grant them access to your account (you can revoke this again from your Twitter account settings).

You might want a more convenient way to view different aspects of your Twitter stream, or even add in updates from other platforms such as Facebook or LinkedIn together with Twitter, so your whole social media stream is visible in one place. To do this, you can use one of the third party applications that were developed to make Twitter easier to use.

Tweetdeck is owned by Twitter, and is a good way to manage more than one account, if you have more than one (for personal and professional use, or perhaps an individual one and an official one on behalf of an institution). However, you can also use Tweetdeck to split your Twitter stream into columns divided by people. It will import any lists you have made on Twitter too.

You can find help documents on how to use Tweetdeck here. There is also an app that you can get at the Mac App Store.

Hootsuite is similar application to Tweetdeck, but it allows you also to import other social media accounts such as Facebook, and it is also available as an app for mobile devices. You can sign up using Facebook, or if you prefer to keep Facebook separate from your professional social media use, you can sign up with an email address, name and password. It will then ask you to add your chosen social network accounts. You can then add streams of content similarly as in Tweetdeck, and tabs for the different social networks. Hootsuite has a quick start guide to help you set up your account.

This is another cool option. According to Buffer their website:

… you can write a bunch of posts at one time, choose which social profiles to send them to, and then Buffer will spread them out throughout the day or week …

Sprout Social is another service that you may want to investigate, possibly later once you’ve been using Twitter for a while. Like Hootsuite, it allows you to integrate other social media accounts into one dashboard. I’ve found it’s actually quite good — the downside? It’s not free. You can get a free trial for a month.

The other bonus of tools like Sprout Social, Tweetdeck and Hootsuite is that you don’t see the advertising ‘promoted tweets’ from companies you don’t follow!

This is a useful tool for managing your follower/following ratio, and naturally, there is a premium service that gives you some more automated options.

This is also a nice tool for building followers and finding interesting people to follow, but it’s a paid service as well. One of the excellent features is that you can get lists of people to follow by hashtag and by user. So if you want to see who’s following, say, Margaret Atwood, you could check out her followers and then organize them in a variety of ways. Great tool.

What does Mark do?

Currently I’m just using the native tools in Twitter, which helps me with one of the “p”s – presence. I use one browser for my personal @markarayner account, and then so that I don’t get confused as to where I am (which happened during my trial on Sprout), I use another browser for the @WesternUMMJC account. I use Buffer to help me schedule tweets, and to give me a chance to edit them.

Think about the kinds of update you’ve seen on Twitter so far from the people you follow. Who do you most want to see tweets from? Try making a list of your own — it can be about any topic of interest to you, not necessarily just journalism, media and communications.